Run the Risk by Lori Foster 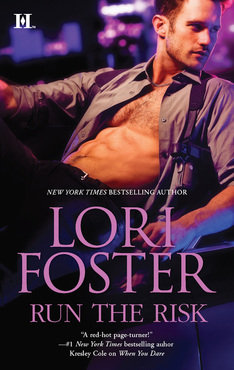 Run the Risk was a thrilling read with that oh-so loved edge of mystery. The characters were all written almost precisely. Pepper was exactly what I expected and everything I didn't - I won't spoil that one. Even with her initial plain-Jane, mousy looks, she and Logan could barely keep their hands off of each other - talk about chemistry. Logan, I also loved, right from the beginning. Even despite the less-than-ideal circumstances, Logan was still strong and brave - an all around hero. All the alphas were introduced in one fell swoop , a little unexpectedly, so were their female counterparts - which I loved. I loved Logan, yes, but Rowdy - man, what a hunk - I adored. Rowdy was almost the very definition of 'troublemaker' and I do love bad boys. Pepper and Logan had me going but Rowdy had me almost begging for more and more after every glimpse - especially when I-won't-tell-you-her-name was introduced. Destined for disappointment, though, I won't be able to read Rowdy's book until after Reese's comes out which means I'll just have to wait (with bated breath) to see how his romance with little miss will-remain-nameless pans out.

Not that reading Reese's book will be a hardship, anyway, because I also did enjoy glimpses of him and - surprise, surprise - Alice and her very subtle quiet-but-sassy attitude. The plot was a little slow in the beginning, but fun to read non-the-less. After Pepper's turnaround - again, I won't spoil it - the book especially took off. As a seasoned reader, I always anticipate certain twists - but I still managed to enjoy the little spin between the siblings on this particular roller-coaster (Pepper and Rowdy, by the way, had the sweetest relationship). Following said spin, Logan's grovelling period was almost comical - I mean, who doesn't love seeing an alpha knocked sideways by a woman?

After all that, I can't find much to dislike. I really could not appreciate the tension surrounding Reese - especially since it didn't amount to anything substantial. I also didn't care for the slow beginning and the ending seemed a tad bit hurried. Even then, Run the Risk could almost get 5 stars - I could hardly put it down.

Nothing can shake a cop from pursuing justice-except a beautiful witness marked for death, in New York Times bestselling author Lori Foster's sexy new series... When Detective Logan Riske goes undercover to find Pepper Yates, a potential link to his best friend's unsolved murder, he vows to gain her cooperation by any means necessary. But the elusive beauty is more suspicious-and in far more danger-than he expected. And the last thing Logan needs is to start caring for her.... Pepper has spent the past five years dodging the corrupt club owner who will stop at nothing to keep her silenced. She can trust no one, not even the handsome new "construction worker" who's moved in next door. The heat between them is undeniable. But will surrendering to passion bring her the safety she so desires-or will her feelings for Logan draw them both into a killer's crosshairs?