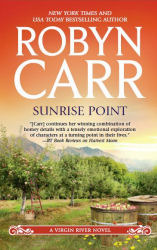 This book was majorly disappointing to me. I'm not going to make this review lenghty, purely because I don't want to turn anyone off from reading it but, lord, it annoyed me.

The book is centred around Nora with her two children and Tom. Let me start with a few good things; Nora isn't afraid of hard work, Maxie is a gem, Nora's dad is pretty cool and her children were adorable. Ok, with that aside, Nora annoyed the sweet sweet bejesus out of me, I mean, how could you be so, 'delicately put', dumb to get pregnant a second time after going through the ordeal of the first conception? That aside, I think her personality was weak and she came off a little whiney at times. Moving on from there, that budding romance between Tom and blonde-whats-her-face was nerve-grating. I mean, I came to read about Tom and Nora, not Tom and whatever-her-name-was (I think it was Darla?). Speaking of the romance, it took  FOREVER for Nora and Tom to get any action in - and I'm only talking about romance, not romance-making- where, beyond that point, the falling-in-love seemed rushed. Other than that, there was some pointless sub-plot involving Coop and Jack, which would have been forgivable if it weren't in the middle of an annoyingly boring plot and if it had actually led somewehere, which it didn't - I'm just hoping there's a book about Coop coming up next to justify it.

With all of that, the book was still decent enough to scrape 3 stars from me (because of the children)... Don't ever count on a second reading by me, though.
" Tom Cavanaugh may think he wants a traditional woman, but in Virgin River, the greatest tradition is falling in love unexpectedly....

Former Marine Tom Cavanaugh’s come home to Virgin River, ready to take over his family’s apple orchard and settle down. He knows just what the perfect woman will be like: sweet, decent, maybe a little naive. The marrying kind.

Nothing like Nora Crane. So why can’t he keep his eyes off the striking single mother?

Nora may not have a formal education, but she graduated with honors from the school of hard knocks. She’s been through tough times and she’ll do whatever it takes to support her family, including helping with harvest time at the Cavanaugh’s orchard. She’s always kept a single-minded focus on staying afloat...but suddenly her thoughts keep drifting back to rugged, opinionated Tom Cavanaugh.

Both Nora and Tom have their own ideas of what family means. But they’re about to prove each other completely wrong..."