The Exceptions by David Cristofano 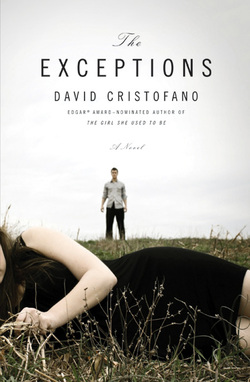 NB I didn't realize it was a his/her aspect series. I got the first book, though, and it has sort of a bum ending.

Jonathan Bavaro spent years – twenty – watching and loving Melody Mccartney(though he didn't call it that), from a distance. The problem? He was cursed to only ever love her from afar by his mafia family who wants her dead.
I don’t think I ever quite appreciated the romanticized violence I’d been reading as I did after I read The Exceptions. Disillusioned, yes, but not at all ungrateful. At first, I was completely floored by some of the gruesome scenes – gruesomeness I had rarely encountered while reading romances. For a while, albeit a short while, I was hesitant – worried, as a blubber baby, that it would be just too much for me. I had an epiphany, though, I realized the books I usually read – the sugar-coated stuff, as I’ll now call them – was what I’d come to expect; though not nearly realistic. I realized the heroes that would always fight nameless, blatantly evil foes only until they cried ‘uncle’ and no further were fanciful. Jonathan created a new sort of hero for me – one with tarnished armor. One that was, somehow, in his imperfection, all the more perfect and human. Jonathan was written beautifully – skillfully – and he captured my heart and, just that easily, influenced my emotions.
More than anything, I think I appreciated Cristofano’s consistency. I expected, of course, that Jonathan would – quite simply – turn his family in somewhere around the end then ride off into the sunset with Melody. Of course, being that this book does not strive to meet my expectations, that does not happen. Instead, from the very beginning, it is apparent how much Jonathan loves his family – that, despite resenting their name, he protects them with as much of his being as possible. I am especially glad that Cristofano kept Jonathan treading the fine line between bad – loyalty – and good - betrayal. I felt Jonathan as easily and clearly as I hear my own thoughts – I felt his indecision, I felt his connection to Melody and, most importantly, I felt his need for her to be free. This need is what drew out that delicious tension – a tension I both hated and loved, mind you – that gave the book its hard edge, that made their relationship near-impossible. If I start on the second characters now, I’d likely never end, so I’ll just summarize them; brilliant.
All I can say is that, despite 23 aggravating years before they truly find each other(and I mean downright frustrating), despite the occasional gruesomeness I never thought I’d get close to reading –I don’t think I could ever quite capture the beauty of what David Cristofano wrote on those pages in this review. I’ll leave that for the readers to discover.

* I did cry like a baby at the end (not a sad baby)
" From David Cristofano, the Edgar® Award-nominated author of The Girl She Used to Be, comes a poignant, darkly witty story about the ties that bind us together . . . and the choices that rip us apart.

No loose ends. It's the Bovaro family motto. As part of the Bovaro clan, one of the most powerful and respected families in organized crime, Jonathan knows what he must do: take out Melody Grace McCartney, the woman whose testimony can lock up his father and disgrace his entire family. The only problem: he can't bring himself to do it.

Had Jonathan kept his silence, Melody and her parents would never have been identified and lured into the Witness Protection Program, able to run but never to hide. So he keeps her safe the only way he knows how-by vowing to clean up his own mess while acting as her shield.

But as he watches her take on another new identity in yet another new town, becoming a beautiful but broken woman, Jonathan can't get her out of his mind . . . or his heart. From the streets of Little Italy to a refuge that promises a fresh start, Jonathan will be forced to choose between the life he's always known, the destiny his family has carved out for him, and a future unlike anything he's ever imagined."