All He Ever Needed by Shannon Stacey 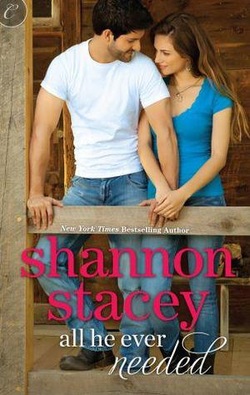 I was so excited about this book after reading Yours to Keep(fabulous!), but, really, I was just a tad bit disappointed. Just to get all the negatives out; I don't think either Mitch or Paige knew what they wanted until the very end, which made for, what I call, 'rollercoaster reading' - where, because the characters are unbalanced, so is the reader. There were two major subplots that occurred in this book; Mallory and Drew's and Rose and Any's. Neither sub-plots were necessary; both annoyed me and one bored me to near death. I tried to warm up to Mallory, but I could not. Nothing is wrong with not having children, but she was in a relationship with Drew for years upon years and allowed him to think, the whole time, that she wanted children with him - I mean; beyotch extraordinaire. Rose, now, had about the same "blame the other guy" attitude - *SPOILER* her husband cheated and *SPOILER* she blamed Andy for her own husband's shortcomings for over twenty years! I mean, that was so immature my head felt like it was going to explode; I wanted to slap her into next week, so great was my annoyance.

Anyhow, Paige and Mitch had an awesome kind of chemistry and some of the cutest scenes I've read in a while. While neither of them really knew what they wanted, Mitch was still indescribably tender towards Paige and Paige still retained her independence and appeal. I'd recommend.

*Arc provided by publisher
He won’t stay put for a woman, and she won’t chase after any man…

Mitch Kowalski lives out of a suitcase—and he likes it that way. Traveling for work has the added bonus of scaring off women who would otherwise try to tie him down. But when he’s called home to help with the family lodge, he’s intrigued by the new girl in town and her insistence that she doesn’t need a man. If there’s one thing Mitch can’t resist, it’s a challenge.

After a nomadic childhood, Paige Sullivan is finally putting down roots. Determined to stand on her own two feet, she lives by the motto “Men are a luxury, not a necessity.” But when Mr. Tall, Dark and Hot pulls up a stool in her diner and offers her six weeks of naughty fun with a built-in expiration date, she’s tempted to indulge.

They’re the perfect match for a no-strings fling. Until they realize their sexy affair has become anything but casual…