Rules of the Game by Sandy James 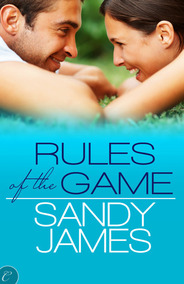 Let me first say... I do not like first-person narration because I find that, usually, authors tend to make the characters less rounded than they should be without an unbiased view. Details are usually left out and I usually find myself frustrated as other characters become distant and unrelatable.

With that said, Rules of the Game did a pretty fair job of warming me up to the first-person narration and I read with ease, despite wishing that I could have read a little from Scott.

While we're on Scott - I loved him. Scott was a great hero, he was the perfect mix - a hard working, caring, bad boy and all-around hottie. Scott made the book in more ways than one for me; he supported Maddie as she went through issue after issue and became a role-model in her son's life (I hope I'm not ruining too much, he came about early enough). Maddie, I also liked; she was funny and sweet, but I liked her less than Scott. Funny, eh? That I'd be saddled with a first-person narrator and like a more secondary character more, meh. Anyhow, she came across snooty much too often, stereotyping Scott and then exploding when he revealed a part of himself. I mean, at times, I wish he would have found a more deserving woman. I also felt like Sandy James saddled her with a little too much baggage -convenient baggage, of course (meaning that she added it to create conflicts based on the baggage). I understood the manipulation of conflicts around issues in the heroine's life, but I still felt like it could have been written a little more subtly; it was almost as if the book was split into sections with each section assigned an issue - very messy in that regard.

All things considered, the book was enjoyable and Scott held me through any reservations I ahd about, though I still wish that the ending could have been cut a little shorter with a prologue instead of all that shenanigans. 3.5 stars does it for me.

"Kathryn West has it all – she’s a confident, bestselling author living it up in New York City. Too bad she doesn’t actually exist, and is only timid Maddie Sawyer’s pseudonym. Determined to attend her high school reunion with a man right out of one of her racy romance novels, she plots to find a sexy bad boy who’s up to Kathryn’s standards.

She finds Mr. Perfect shooting pool in a biker bar. He’s a blue-collar hunk who just happens to look great in leather. But the mysterious Scott Brady has some rules of his own: he won’t agree to her deal unless she poses as his girlfriend in front of his family and friends first.

As the reunion nears, Maddie tries to maintain her carefree façade, knowing she’ll soon face some old ghosts. She’s torn between her growing attraction to Scott and the nagging feeling that he’s hiding something important. Will she still want him when she finds out his secret? What about when he discovers hers? "