The Wicked Wedding of Miss Ellie Vyne by Jayne Fresina 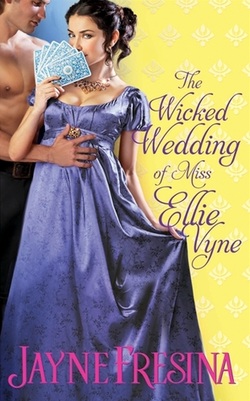 The Wicked Wedding of Miss Ellie Vyne was one of the absolute most amusing books I've read recently and, since we're at the end, I get to say it's one of the absolute most amusing books I've read in 20-twelve.  Jayne Fresina has a remarkable gift for words. Every character was well-written and well-rounded which resulted in an exciting, hilarious story.
I loved Ellie and Ellie's wit (which deserves demarcation) but, even more, I loved Ellie and James as a couple. Their relationship was loud and, in every way, messy - it bordered cantankerous at times, but only in the best possible sense. Despite that, they had moments of extreme tenderness and their sparks could ignite a room. My favorite character, though, would probably be Grieves - the hilarious butler.
The plot was a bit unexpected for a historical - hardly ever are characters so brazen when written in that time, but Fresina went against the usual flow and made a refreshing change while doing it (I was still surprised, mind you). There were plenty of twists and turns throughout the book and, I found, towards the end, the plot revolved around a certain character but, I suppose, that is what is to be expected in such a situation. I loved, though, absolutely loved, the glimpse we were given into Rafe and Mercy and, even more so, Molly and Carver - cute!
Every book has a few faults and, in this, the faults I found were inconsequential - I didn't like that we didn't get more from James and the certain character the plot revolved around at the end and Sophie, quite frankly, peeved me off a bit towards the conclusion.
With that, though, The Wicked Wedding of Miss Ellie Vyne was a great read and I can hardly wait to read Mercy's book as well as Molly's.

By night Ellie Vyne fleeces unsuspecting aristocrats as the dashing Count de Bonneville. By day she avoids her sisters' matchmaking attempts and dreams up inventive insults to hurl at her childhood nemesis, the arrogant, far-too-handsome-for-his-own-good, James Hartley.

James finally has a lead on the villainous, thieving Count, tracking him to a shady inn. He bursts in on none other than "that Vyne woman" . . . in a shocking state of dishabille. Convinced she is the Count's mistress, James decides it's best to keep your enemies close. Very close. In fact, seducing Ellie will be the perfect bait . . .